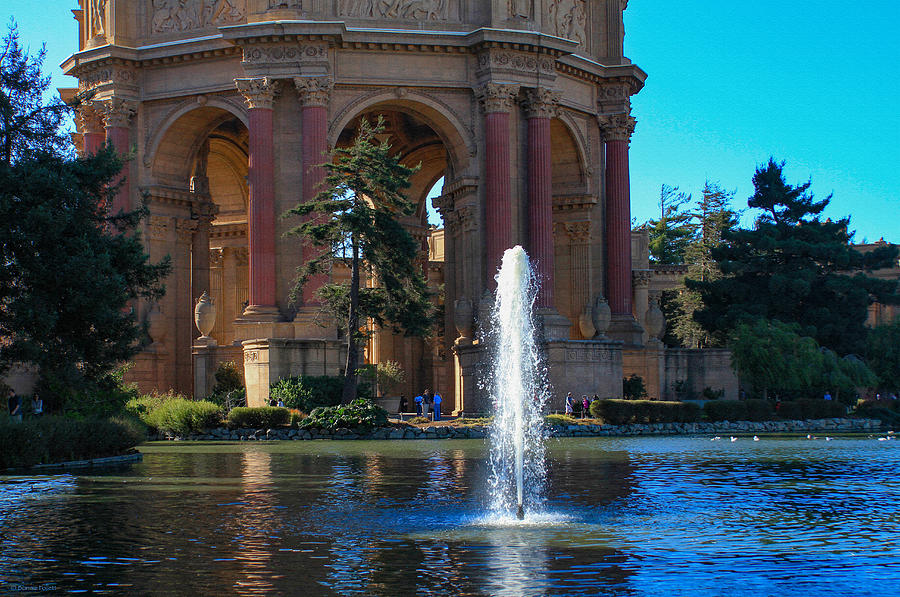 Fountain and Palace of FIne Arts

Fountain and Palace of FIne Arts

This is a photo taken of San Francisco's Palace of Fine Arts, and its lake and fountain in late afternoon sun. It is one of the most beautiful places to visit in the City and a favorite place for weddings and wedding photography. I've never been here when there has not been at least one or two couples with their photographers.

After the devastation of the 1906 earthquake and fire, San Francisco was anxious to show the world that it had risen from the ashes. So in 1910, business and civic leaders gathered to discuss making San Francisco the site of the century's first great world's fair - a grand exposition that would honor the completion of the Panama Canal. In just two hours, they raised $4 million and beat out competitors New Orleans and Washington, D.C., to host the 1915 Panama Pacific International Exposition.

Built on 635 acres reclaimed from San Francisco Bay, the exposition featured 11 great exhibit palaces showcasing objects from every corner of the globe, more than 1,500 sculptures commissioned from artists all over the world, 65 acres of amusement concessions, an d an aviation field. Twenty-one countries, 48 U.S. states, and 50 California counties mounted displays in the exhibition's grand pavilions.

Widely considered the most beautiful structure at the exhibition, the Palace of Fine Arts, housing art from Renaissance to Modern, was the work of California architect Bernard Maybeck. Maybeck's fantastic creation, inspired by a Piranesi engraving, featured a Roman ruin reflected in a pool. According to Maybeck, this ruin existed not for its own sake but to show the mortality of grandeur and the vanity of human wishes. Like other features of the fair, the Palace was intended as ephemeral; at the close of the exposition, it would come down.

On opening day, February 20, 1915, 255,149 people walked through the entry gates to experience the first world event of the 20th century. By the time the exposition closed nine months later, more than 18 million people, about 20 times the population of San Francisco at the time, would visit the exposition. And when this spectacular festival came to a close with fireworks and a solitary bugler playing taps, by all accounts, the crowds wept.

But when the exposition ended, the Palace lived on, saved from demolition by the Palace Preservation League, founded by Phoebe Apperson Hearst while the fair was still in progress. Today the Palace of Fine Arts is the last reminder of a great gathering that welcomed the world back to San Francisco, and it continues to hold a special place in the hearts of Bay Area residents and visitors. The Palace is truly a landmark to love.

love this very much ! f/l

This is absolutely beautiful Bonnie

Beautiful capture of this lovely place!