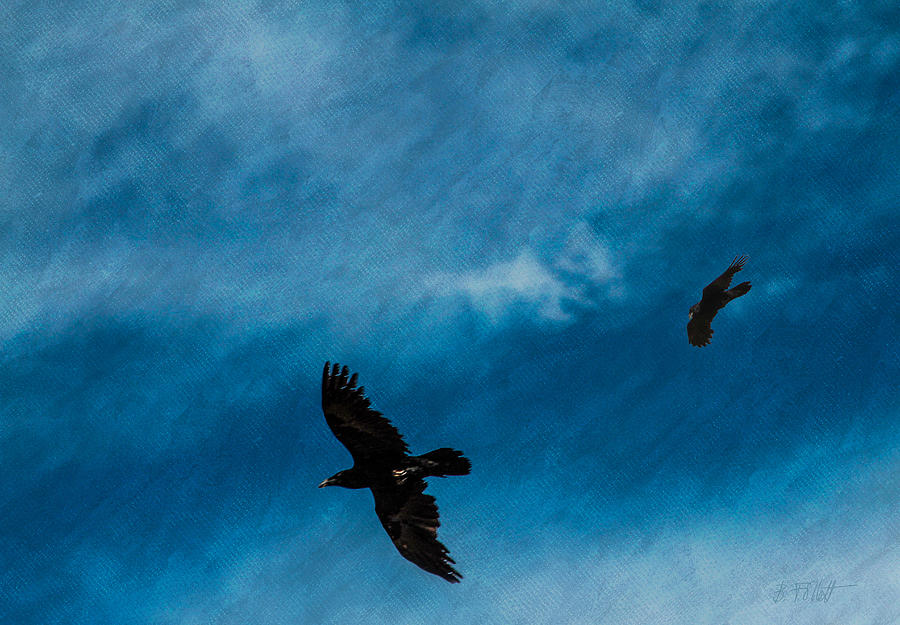 When Ravens Come Calling is a photo painting I found myself working on in the wee hours of 9/11/2016 for no apparent reason. Later I realized this may have been an unconscious thing, symbolic of the 15th anniversary of 9/11/2001, when two planes took down the World Trade Center's twin towers. The image depicts the flight of two ravens in an ominous sky.

Ravens have a variety of symbolic meaning in various cultures, sometimes a symbol of grief and loss but more often a positive symbol of a powerful character. Its most famous literary reference was in the poem The Raven by Edgar Allan Poe.

I found an interesting analysis of that poem at http://www.shmoop.com/the-raven/raven-symbol.html

Symbol Analysis
... Not only is it the title of the poem, but even once we've heard all about Lenore, and the guy in his chamber, it's probably the image of the Raven that sticks most in our minds. It was a pretty great choice on Poe's part, a bird that looks like a part of the black night it came out of, a little scary looking, but also hard to read. The Raven is everywhere in this poem, but we'll hit a few key moments here.

Lines 38-40: The Raven's big entrance. Notice how much emphasis Poe puts on the way he comes into the room. The image we get is of a king or a queen walking into a throne room. He mentions that the Raven is "stately" and he also says that its "mien" (its way of acting) is like that of a "lord or lady."

Line 45: This quick reference to a shorn crest is an allusion to a medieval tradition. Sometimes when a knight behaved in a cowardly (craven) way, he would have his head shaved to humiliate him. This reference creates an even stronger link between the raven and an old world of kings and queens and knights.

Line 48: The famous line: "Quoth the Raven, Nevermore." When a line gets repeated again and again in a poem, we call it a refrain. This particular refrain is what totally takes apart our narrator, and turns him from a sad, nervous guy into a shuddering wreck. When the bird says it for the first time, the narrator thinks it's amusing nonsense. After a while, it starts to seem like a horrifying prophecy.

Line 85: Here the narrator starts to believe what the bird is saying. Since he thinks the word "nevermore" is actually foretelling the future, he refers to the bird as a prophet. He can't decide if this is just a bird, or some "devil," but he is completely convinced that it knows what it's talking about.

Line 105: Our final image of the bird is that of a sleeping demon with burning eyes. He casts a shadow over the whole room, and completely terrifies our poor narrator. Starting out as a sort of funny bird with a strange way of walking into a room, he's now the symbol of pure satanic evil. All that in just 60 lines.

The full poem can be found at: http://poestories.com/read/raven

Thank you for supporting Rigdon! This artwork was featured in the ART IN MOTION Discussion: ART I LOVE, THAT'S NOT MINE! Please also share some work you love by other talented artists! http://fineartamerica.com/groups/art-in-motion-gallery-quality-.html?showmessage=true&messageid=3061961

This is great, Bonnie!